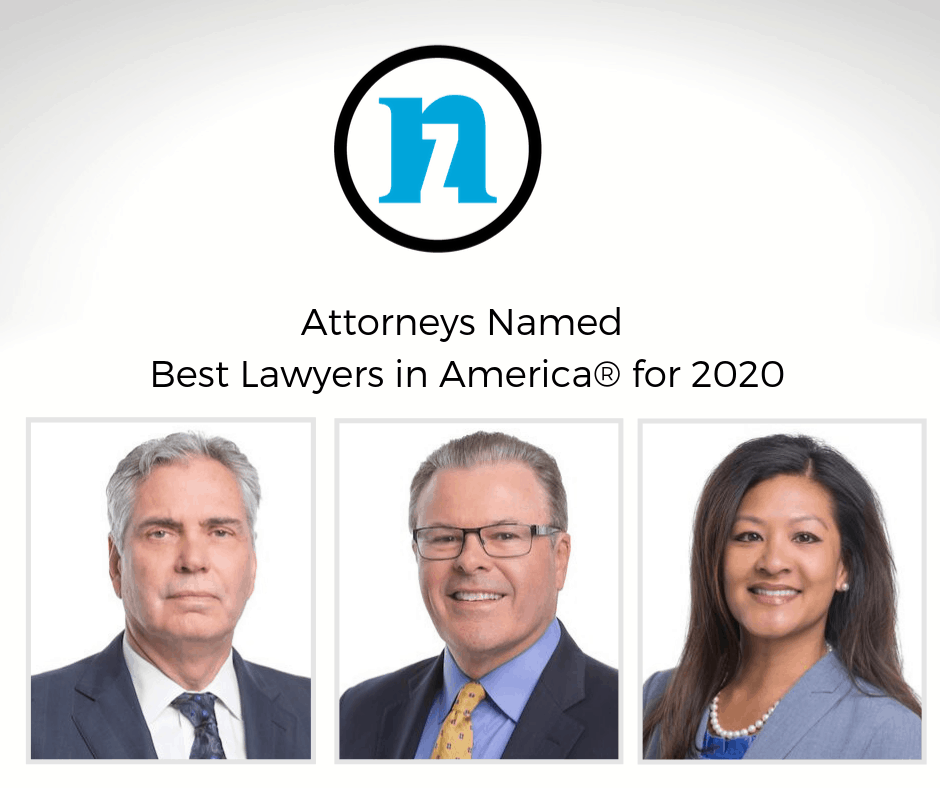 Congratulations to Charles J. Zauzig, Paul F. Nichols and Cassandra M. Chin for being selected by their peers to be included in the 2020 edition of The Best Lawyers in America© for the Washington D.C. metropolitan area.

Mr. Zauzig, who has been selected for 14 years, is included for both Medical Malpractice Law-Plaintiff and Personal Injury-Litigation. In her first year for this honor, Cassandra M. Chin is recognized in the area of Family Law, as is Mr. Nichols – for the 14th consecutive year.

According to the Best Lawyers® magazine in today’s The Washington Post, 10 million peer evaluations were completed for nominated attorneys across the U.S. in 146 practice areas. From that process, 92,602 attorneys nationwide were recognized, including 3,236 in the Washington, D.C. metropolitan area.

Mr. Zauzig is a former President of the Virginia Trial Lawyers Association (VTLA), which honored him in 2017 with their Distinguished Service Award. He is a fellow with the American College of Trial Lawyers, which is limited to the top 1% of lawyers in any state or province in North America. For his commitment to legal teaching and training, the Southern Trial Lawyers awarded Mr. Zauzig with the Professor W. McKinley Smiley, Jr. Lighthouse award in 2013.

Mr. Nichols is a Fellow with the American Academy of Matrimonial Lawyers and was recently named to the Class of 2019 “Leaders in the Law” by Virginia Lawyers Weekly, an honor limited to 30 attorneys and law professionals. Since 2006, Mr. Nichols has been selected as a Virginia Super Lawyer®, and for the past two years, he’s been a Top 100 Super Lawyer®. In addition, Mr. Nichols has received Martindale Hubbell’s highest rating (AV-Preeminent) for legal ability and ethics, and is annually selected as a Top Lawyer in Northern Virginia Magazine and Washingtonian magazine.

Ms. Chin is a Diplomate with The American College of Family Trial Lawyers (ACFTL), which is limited to 100 of the top family law attorneys in the United States and is by invitation only. She is a Fellow with the American Academy of Matrimonial Lawyers and serves as the national Membership Committee Chair and Virginia representative. Washingtonian magazine named Ms. Chin a Top Lawyer in 2018 and she has been a Washington, D.C. area Super Lawyer® since 2016.

For 30 years, Nichols Zauzig has provided criminal defense, divorce and family law, and personal injury legal representation to clients in Northern Virginia and beyond from offices in Woodbridge, Manassas, and Stafford. Find out more at www.nzslaw.com.