One of the founding partners of Nichols, Zauzig & Sandler talks about his blue-collar upbringing, his early professional golf aspirations and why he became a lawyer.

ROOTS: Paul was raised in Wilkes-Barre, a coal mining area of Pennsylvania. He was the first in his family to attend college. Paul’s Dad was a tool and dye maker and his Mom was a florist. “When I came to D.C. to interview for law school (at GMU), I thought, Wow! There’s a lot going on here that’s not going on in Pennsylvania.”

ALTERNATE PROFESSION: Early on, Paul wanted to become a professional golfer. He played four years in college, earning a letter as a freshman while also learning the limitations of his game “Thank goodness I didn’t pursue a golfing career. At the end of the day, I would have been putting bags on a cart as an assistant pro somewhere.” 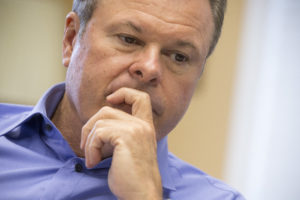 PASSION: Local politics, especially improving public transit, is one of Paul’s passions. As a former State Delegate, Paul is still involved in lobbying to bring Metrorail down Route 1 to Prince William County. “I want my grandkids and their children to have a great place to live in the future here. Key to that is public transit.”

WHY LAW?: As a teen, Paul worked summers in the offices of a hometown attorney, who came up through tough times and later became a judge. He inspired Paul, as did the black and white nature of a trial’s resolution. “In life, you are forever talking to people who think they are right. With litigation, you have an objective party determining who is right.”

FAMILY: Paul has two adult children and three grandchildren. His daughter and family live in California. Paul’s son lives in the area with his family, including 6-year old Paul Nichols, IV.

PERSONAL ATTRIBUTE: A strong work ethic was ingrained by Paul’s upbringing. “Coming out of the coal mining country environment, I can’t help it; I’ve got to work hard.”

FAVORITE TEAM: Hail to the Redskins! Paul is a season ticket holder and has hosted charitable events with players Ryan Kerrigan and Mark Brunell.

SOURCE OF PROFESSIONAL PRIDE: In divorce cases, Paul takes pride in “helping people get through what’s often the worst time in their lives. Breaking up with someone they’ve shared their life with involves emotions, money, and feelings of rejection. I help my clients to make sense of it, and to come out on the other side without destroying each member of the family.”

WHAT SETS HIM APART: In addition to the law firm, Paul has owned several other businesses including five gas stations, such as the Texaco in Tackett’s Mill at Lake Ridge. His role as a small business owner “fosters a business-like approach to divorce with my clients. We know not to waste money on needless items, and when to spend money on things that matter.”

ON NZS LAW: As the largest litigation firm based in Prince William County, NZS Law offers multiple practice areas and alternate perspectives. “We’re always walking into each other’s offices and asking how would you handle this judge? Or, what do you think of this angle? We have the best of the best, all in one house, which breeds better lawyers overall.”