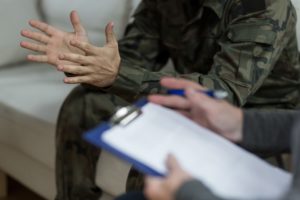 Could you lose your security clearance, the trust and respect of friends and colleagues, or your reputation on just he said/she said evidence?

The danger of this is growing in the recent climate of the #MeToo movement. False accusations against innocent people can get lost in the many, many genuine stories of abuse and assault.

Credible allegations provide cover for false or misleading ones. The legal deck was already stacked against people accused of domestic violence and family abuse before this phenomenon, but it’s getting worse as each new accusation and revelation in #MeToo deepens the gut instinct of the public to automatically believe someone when they claim to be a victim.

Even before any domestic violence or abuse charges are made in the court, police detectives have usually already begun investigating the case.

In most Virginia courts, including Prince William County, Manassas, and Stafford County, the state can and will prosecute, even if the victim decides they don’t want to press charges.

In many cases, claims of prior abuse can be raised at any time, and they can threaten careers and families even if there is only the word of the accuser to go on.

Judges often issue Protective Orders solely on the basis of an accuser’s statements, without any other evidence, and these stay in place for weeks before the person accused has an opportunity to defend himself.

The employment issues can be complicated too. Employers must respect a worker’s privacy, but they also must provide a safe working environment for employees in their workspace.

An employer often faces a difficult choice between loyalty to a valued employee and avoiding being the target of legal trouble themselves. Ultimately, a person accused of family abuse or domestic violence can’t afford to rely on the goodwill of his employer or his otherwise unblemished work history to shield him.

Given these possibly career-ending, reputation-destroying results from one-sided allegations of abuse, anyone who has been accused of domestic abuse or assault, or who thinks they might be, needs to immediately consult an experienced domestic abuse defense attorney to aggressively defend his rights.

He should consult someone who, like the police, will thoroughly investigate the accusations, but with a focus on searching for potential lies or bias in the person making the accusation.

Someone accused, or someone who thinks he might be, should absolutely not speak to anyone, including his employer, before consulting with an attorney. Having strong, experienced counsel to defend you, from the very beginning of such life altering allegations, is a must for anyone facing accusations of family abuse or assault.

Call our experienced and highly skilled domestic violence and family abuse attorneys today at 703-492-4200 for a free consultation to discuss your rights and options. Let us help you regain control of your life and your future.

DISCLAIMER: The results of every case depend on factors unique to that case, and Nichols Zauzig  does not guarantee or predict results in similar cases.