Will the Consumer Financial Protection Board survive the Supreme Court case on March 3?

Two years after the 2008 financial crisis, Congress passed a massive piece of consumer protection legislation. The Dodd-Frank Wall Street Reform and Consumer Protection Act was signed into law by President Obama in 2010, stating its goal “to protect consumers from abusive financial services practices.” The vote passed in both houses of Congress largely along party lines.

As part of this comprehensive legislation, Congress created a new federal agency, the Consumer Financial Protection Bureau (CFPB). The CFPB is an executive agency responsible for regulating providers of a wide range of consumer financial services, as well as enforcing federal consumer financial protection laws. Its authority to regulate extends from simple check cashing services to personal and business loans and real estate lending.

This case asks whether Congress structured the agency constitutionally. Since its establishment, the CFPB has met opposition from conservative businesses opposed to the agency’s intrusive powers. The present case brings that view to the Supreme Court, arguing that Congress cannot create an agency head with such power and also limit the President’s power to remove her.

The CFPB Director and removal limitation

The CFPB is headed by a single Director who serves a five-year term and is “appointed by the President, by and with the advice and consent of the Senate.” The President may remove the Director but only by reason of “inefficiency, neglect of duty, or malfeasance in office” (“for cause”). Kathleen Kraninger, the agency’s current director, was appointed by President Trump in 2018 and confirmed by the Senate in a party-line vote.

The “for cause” limitation on the president’s removal authority is the issue before the Supreme Court. Seila Law argues the U.S. Constitution does not allow such a limit on the ability of the president to remove the agency head.

The challenger Selia Law (also the Petitioner) is a law firm that provides consumer debt relief services. The CFPB initiated an investigation into Selia Law’s telemarketing practices and issued a demand for documents and information. Selia Law objected to the demand on very “big picture” grounds: that the CFPB’s structure violates the Constitution’s separation of powers principle which is embodied in the Constitution’s “Faithful Execution” clause. Selia Law argued that with an unconstitutional structure, the CFPB’s investigative demand against Seila Law — and in fact everything else the agency does — is unlawful and unenforceable. The district court ruled against Seila Law, holding that the CFPB’s CFPB structure is valid and the agency’s demand against the law firm is valid. The Ninth Circuit supported the ruling.

On appeal, Seila Law asks the Supreme Court to decide whether Congress may grant broad executive authority to the CFPB (an independent agency led by a single director) while limiting the chief executive’s removal power.

The Constitution: removal of executive officers

The parties generally agree on the framework the court should use to answer this question. The Constitution empowers Congress to establish and organize executive agencies. Article II empowers the president to nominate executive officers to lead these agencies who are then appointed upon the advice and consent of the Senate. The Constitution does not contain a specific provision regarding removal of such officers apart from Congress’s impeachment power.

The Constitution does say, however, that the President is responsible for “faithfully executing” the laws, and in past Supreme Court precedent, the Court has used this clause to determine the President generally must be able to remove executive officers as he pleases. There are some exceptions, however, and the Justices will be looking closely at them if the case reaches consideration of the Faithful Execution clause.  The case could have far reaching consequences regarding the scope of executive and legislative authority in removing executive branch officials.

Before the Court decides the big issue in the case, it will take up an initial inquiry. The Justices must decide whether this case brings an appropriate set of facts for answering the question of executive officer removal. The case started with a “garden variety” investigation by the CFPB. Seila Law turned it into a question of how the director of the agency can be removed by the President, but nowhere in the facts has anyone actually wished to remove the CFPB Director.

The point is raised by Paul Clement, a court-appointed lawyer, who will be arguing the case on behalf of the CFPB. In rare cases, one of the parties decides not to defend its side of the case, so the Supreme Court will appoint a third party to brief and argue the case. That’s what happened here. The CFPB, under the Trump administration, has decided to support Seila Law instead of argue to defend its own agency structure.

Paul Clement argues that Seila Law and the CFPB have turned the case into a hypothetical question of removal based on underlying facts which do not involve removal at all. Clement points out that Article III of the Constitution prohibits courts from taking abstract inquiries, so the Justices should throw this case out.

To illustrate, Clement says, the CFPB Director under Obama, Richard Cordray, started the investigation into Seila Law. Cordray has since been replaced to a director appointed by Trump, Kathleen Kraninger. Kraninger has indicated she is willing to drop the investigation into Seila Law if Trump so desires. But that is not the case. And Trump does not want to remove Kraninger. In fact, the parties are so aligned that their mutual disapproval of the agency is what is driving CFPB to support Seila Law in this case.

Clement notes that in all of the Court’s other precedent questioning the president’s removal power, the underlying case involved an actual removal or attempted removal of the officer. This is not such a case. It’s hypothetical, Clement argues.

If the Court gets past the standing argument, it will review whether the “for cause” removal provision is valid under the Constitution.

Selia Law and the CPFB argue that the agency’s “single-director independent-agency structure” violates the separation of powers. It does so, they argue, because Article II, section 3 of the Constitution directs the president to “take care that the laws be faithfully executed.” Thus, Congress may not insulate an executive officer from removal by the president by limiting how the officer may be removed.

A “for cause” removal provision inhibits the president from carrying out that responsibility. Seila Law and the CFPB rely in large part two cases. In Myers v. United States (1926), the Supreme Court held it unconstitutional to condition removal of postmasters on the advice and consent of the Senate. And in Free Enterprise Fund v. PCAOB (2010), the Court struck down part of the Sarbanes-Oxley Act that granted broad powers to a board while preventing the president from appointing or removing board members. 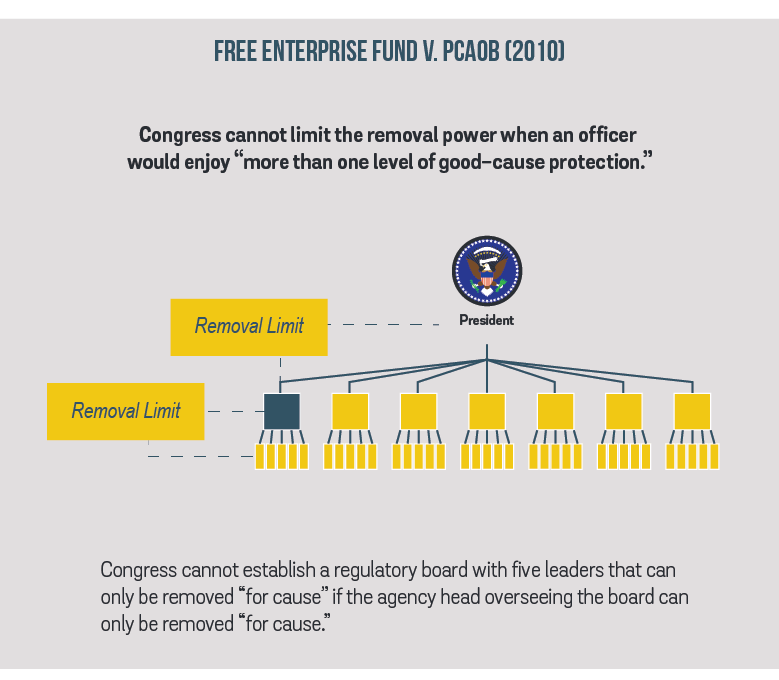 Seila Law and the CPFB face a significant hurdle, however, to distinguish a case of longstanding precedent: Humphrey’s Executor v. United States (1935). Humphrey’s Executor held that Congress could condition removal of members of the Federal Trade Commission (FTC) on cause. Since 1935, Humphrey’s has stood for the approval of certain “for cause” provisions. The decision rested on the agency’s quasi-legislative/quasi-judicial roles rather than a purely executive ones. Seila Law takes the bold step of arguing Humphrey’s should be overruled; otherwise Seila Law will have to distinguish this agency structure of the CFPB with that of the FTC in Humphreys’s. 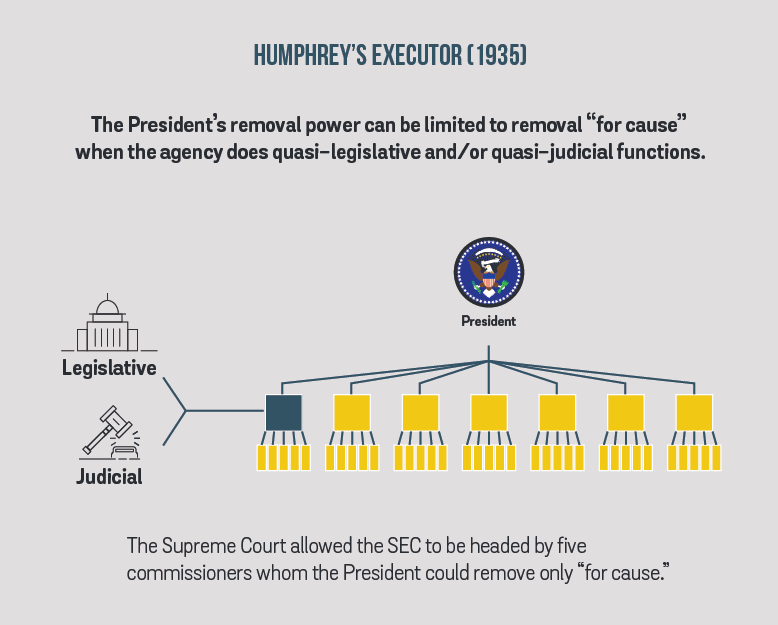 Mr. Clement relies extensively on Humphrey’s Executor and dismisses the suggestion that it is a mere exception to the general rule that the President should be able to remove officers at will (from Myers). Instead, he argues that Congress has long recognized that cabinet level and similar agencies (Defense, State, Homeland Security) are different from agencies with more specialized roles, such as the FTC, FCC or CFPB. He concedes that in neither case should Congress play a direct role in removal of officers because there is no “removal clause” in the Constitution.

However, in more specialized agencies (such as the FTC), “modest restrictions” on removal are appropriate and have been consistently upheld. So long as Congress does not have final say on removal, a provision limiting the president to “inefficiency, neglect of duty, or malfeasance in office” does not interfere with the executive’s duties under Article II. Clement  bolsters his argument with Morrison v, Olson (1988), a case which justified a removal limit based on the agency’s need for independence from the executive. In Morrison, the Court upheld the structure of the Office of the Independent Counsel even though it performed purely executive functions and the Independent Counsel could only be removed for cause by the Attorney General. 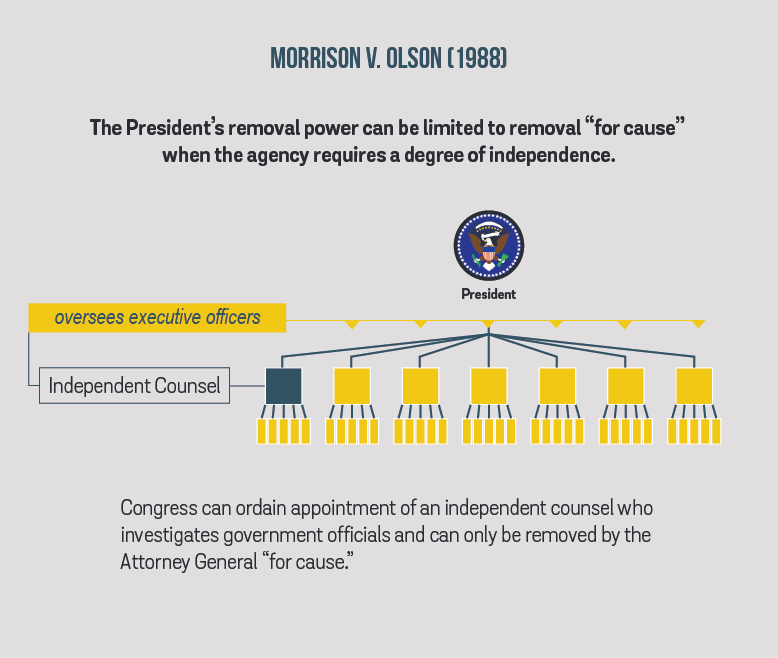 Seila Law and the CFPB point out in response that the CFPB is a powerful agency charged with policing the nation’s entire financial sector. According to the challengers, neither Morrison nor Humphrey’s can justify giving an officer so much executive control without allowing the President to remove him at will. And if they do, the challengers argue, then the cases should be overruled.

And if the agency structure is unconstitutional, what then?

If Seila Law and the CFPB get the Supreme Court to agree that the removal provision is unconstitutional, the Court will have to decide what happens to the rest of Dodd-Frank. This is where Seila Law and the CFPB disagree. Seila Law would argue that if the director’s removal provision is invalid, the rest of Dodd-Frank goes down with it. That will leave consumer financial protection in the state it was before the act was passed. Seila Law does, however, argue the Court doesn’t need to answer that question as part of this case.

The CFPB argues that if the removal provision is invalid, the rest of Dodd-Frank — all of its major consumer protection provisions — should still stand. Congress wouldn’t have wanted the entire act to go just because the agency can’t be independent.

The Justices will hear arguments on March 3, 2020. 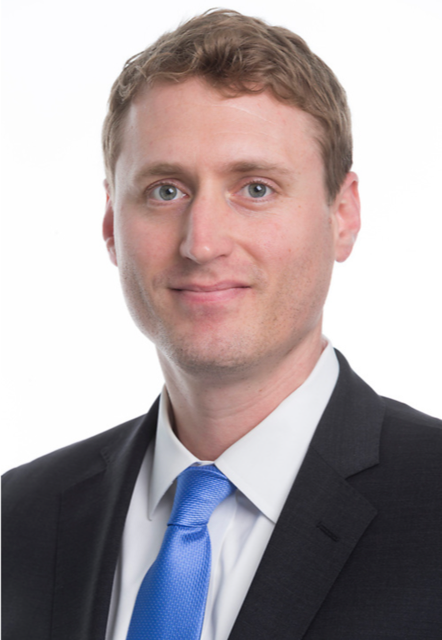 Michael Hollingsworth is a lawyer with Nichols Zauzig, a litigation firm with offices in northern Virginia. He practices criminal and white collar defense, as well as general litigation. Michael attended the Catholic University Columbus School of Law in Washington, D.C. and earned his bachelor’s degree in political science from St. Mary’s College of Maryland. Prior to law school, he worked in the U.S. House of Representatives, the White House, and the federal affairs division of the Grocery Manufacturers Association.