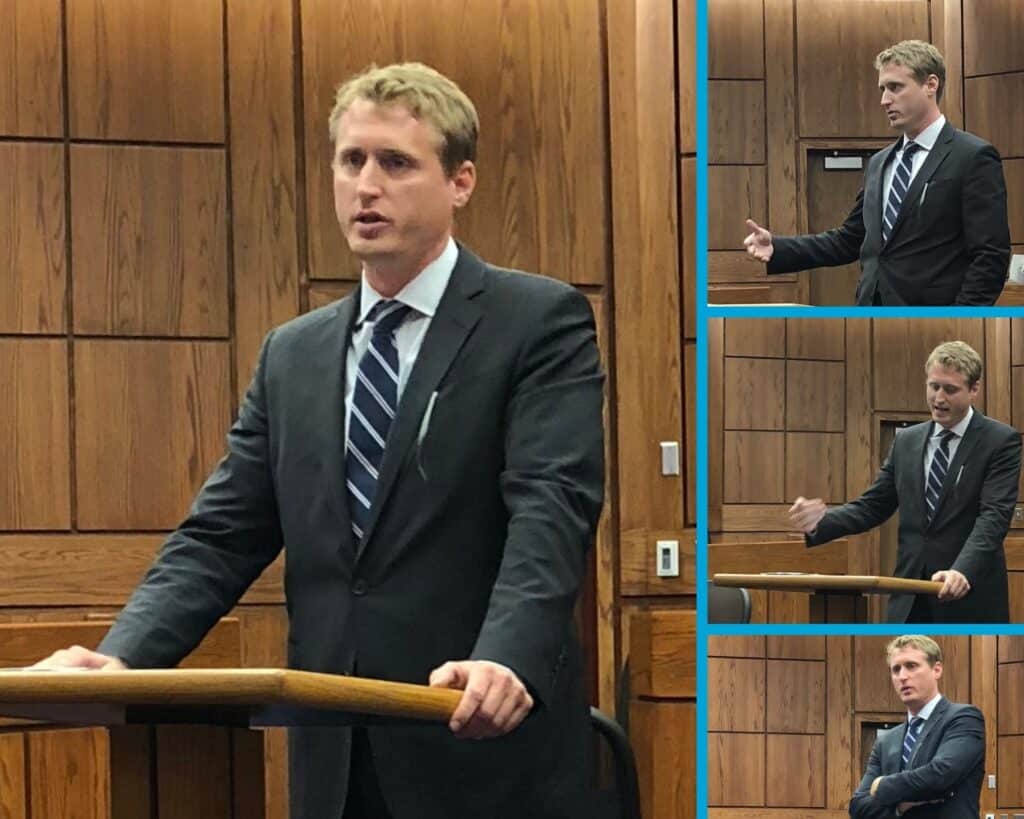 Mike Hollingsworth is a partner at Nichols Zauzig and has been with the firm since 2014. Find out more about him and how he became the passionate attorney he is today.

Phillies, Eagles, Flyers, 76ers. These sports teams defined Mike’s childhood growing up outside Philadelphia, in suburban New Jersey. “I’ll always truly be from up there, no matter how long I live in the D.C. area,” Mike says. He grew up playing and attending sports games of every sort, with baseball having the slight edge as his favorite. He’s from a tight-knit family, most of whom still live there. When visiting home, Mike savors the authentic Italian food and time spent with family and friends.

Even though the Philadelphia area has his heart, Mike enjoys living in “the capital city of the most powerful country in the world.” He attended law school at Catholic University and followed a lifelong interest in politics to work as a White House intern, and later on Capitol Hill. He’s had some unforgettable experiences, including meeting President George W. Bush and sitting up close for several State of the Union addresses. He worked on the floor of the House of Representatives and witnessed several historic votes, not to mention “the arm twisting that goes into getting representatives to vote one way or another.”

Mike’s grandfather shaped his life in a lot of ways. His mom’s father was an Italian immigrant who put himself through college and started a business that was eventually a publicly traded company. In addition to his grandfather’s drive, Mike admired his devotion to family. “He loved us more than anything. I could never wait to see him. We spent every summer together down on the shore.”

Mike’s parents forecast his law career based on how much he liked to argue as a kid. And how really good he was. They said it came naturally. “I always kind of knew that’s what I would do,” he recalled. His Dad’s father was General Counsel for Random House Publishers and read every manuscript for legal ramifications. “Every time I saw him, he would give me dozens of books. Endless books. So, I had a lot of cool things to read growing up.” Despite the wide variety of material, Mike favored reference books like encyclopedias. Not surprising for someone who would become respected by peers and judges alike for his fact-based motions and arguments.

Traveling, the beach and sports. Life doesn’t get much better than that during Mike’s off hours. He’s been going to the shore in New Jersey every summer his entire life. But the pull of familiarity is offset by his passion for international travel. “Since we have everything in this country, it’s so easy to forget what else is out there. It’s important to know what else is out there.” He is fascinated by different cultures, and by the similarities of people all over the world. Mike especially wants to visit the Middle East, Iran, North Korea—”places that have been vilified. Because I’ll bet they’re not what we all think they are. They’re just people, like you and me, at the end of the day.”

Why start in Criminal Law?

This is an easy answer for Mike. It’s about individual rights and fairness. He is a tenacious defender of the Bill of Rights. “Our founders were worried about day-to-day government encroaching on people’s lives and taking their freedoms away.” As a college student, Mike saw a few peers’ promising futures rerouted by seemingly innocuous laws and apathetic legal representation. “I want to help people like that. I may sometimes care more about their situation than they do. But maybe they need that.” This attitude underlies the tenet of Mike’s practice: treat every case with equal urgency and dedication. “The courthouse is the one place where everybody is supposed to get a fair shot. Regardless. And that’s exactly how it should be. It’s my job to help people who really need it.”

The shift to Medical Malpractice Law

“It may not be obvious at first, but victims of medical negligence can be overpowered and marginalized just like those facing criminal charges. Like the government, insurance companies and healthcare providers have immense resources and can often outspend their opponents.” Also, “tort reform” and damages caps make it extremely difficult for many individuals to overcome that. Over the years, Mike says he “saw firsthand what Chuck, Melissa, and the rest of our team were able to accomplish for people in need.” His goal is to use the skills he sharpened doing criminal litigation to help improve healthcare standards for all people by holding negligent doctors and other providers accountable. “I’m excited for the new challenge and believe I’ll be successful with it.”

“If you or a family member is facing a catastrophic injury, you need to have resources available. And we have those. We have the staff and capability to handle a big case.” That means having the time, research, contacts and experts a client needs when facing serious consequences. What also matters to Mike is the quality and work ethic of the firm’s attorneys and leadership. At Nichols Zauzig, “I respect what we’ve accomplished and how we run our business.”